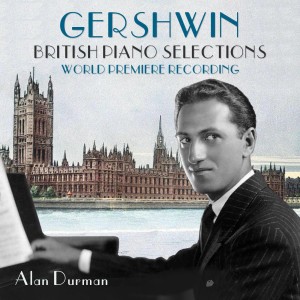 About the album:
Beginning with popular songs inserted into musical revues, George Gershwin went on to write scores for musicals, films and full-scale concert works. He had a natural gift for melody, combined with inspired countermelodies and shifting harmonies comparable to those of Chopin, with great enthusiasm for the ‘pep’ and vitality of the jazz age. When coupled with the outstanding lyric writing talents of his brother Ira, they wrote some of the most enduring popular songs of the twentieth century.

In the 1920s their songs began to be inserted into revues and musicals in London, such as ‘Mayfair and Montmartre’, and, in 1923, George was offered a considerable sum to come to London to write a new revue, ‘The Rainbow’. He returned the following year to compose a new ‘British’ musical, ‘Primrose’, with English lyricist Clifford Grey. He came to London on several more visits to mount a string of successful musicals, including ‘Lady, Be Good!’, written with Ira, often transferring them after the New York production.

In the course of researching for my book, ‘George Gershwin: An American in London’, I discovered a series of piano selections from these shows, written as souvenirs for audience members, who were also talented pianists, to play at home. Unfortunately, many of these shows were revues, consisting of many different scenes, or musicals with slender plots, and it occurred to me that a piano selection was often the only way to obtain an idea of the music contained in these long forgotten shows. None of these selections has been recorded before.

“(A) Brilliant idea….beautiful performances that sound so deliciously authentic.’