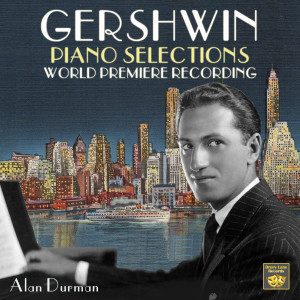 Download includes, as a bonus track, piano selection from the Fred Astaire movie, ‘A DAMSEL IN DISTRESS

This time, Alan performs never-before-recorded selections  from  George Gershwin’s New York productions, ranging from little-known shows like ‘La La Lucille’ and ‘Song of the Flame’ to blockbusters like ‘Strike Up The Band’ and ‘Of Thee I Sing’. Alan also includes a selection from the Fred Astaire movie: ‘Shall We Dance’.

In 1919 George wrote the music for his first ‘book’ show ‘La La Lucille’ and never looked back. He went on to write songs for a series of ‘George White’s “Scandals”’ revues, collaborated on the music for ‘Song Of The Flame’ with Herbert Stothart and ‘Rosalie’ with Sigmund Romberg, followed by three classic musicals: ‘Strike Up the Band’, ‘Girl Crazy’ and ‘Of Thee I Sing’, before moving to Hollywood to write two Fred Astaire movie scores.

In the course of researching for my book, ‘George Gershwin: An American in London’, I discovered a series of piano selections from these shows, written as  souvenirs for audience members, who were also talented pianists, to  play at home. Unfortunately, many of these shows had slender or non-existent plots, and it occurred to me that a piano selection was often the only way to obtain an idea of the music contained in these long forgotten shows. None of these selections has been recorded before.